Learn How To Handle Kukuri
" Learn from the experts. Khukuri House Thamel teaches how"

Page: 1 2 3 4 5 6 7 Next »
1 - To Carry
The most common and the easiest way is to wear the kukri at waist level on one side, opposite side of the using hand. (Mostly on your left side and to pull it with your right)

Soldiers on parade, the kukri are worn on the middle/center of the backside. The idea is to get both waist sides free so that hands can be moved freely while performing. However the drawing task is more difficult because of its placement. But with practice, Gurkhas do it with no trouble.

Different people carry kukri in different style or in whatever manner that benefits them the most. Most village kukris don’t have belt loops since they don’t put on waist belts as they prefer to wear “Patuka” (a long cloth that goes around their waist circling it twice or thrice). Villagers’ use it to hold their kukri as shown in the picture.

» Put mouse on the thumbnail to enlarge 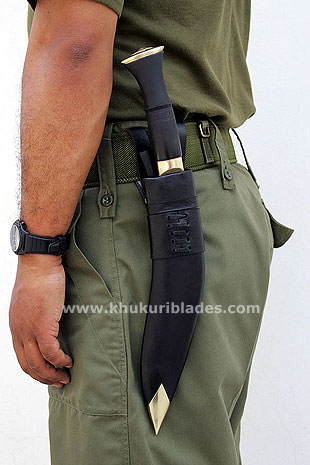